Has the fire consumed us?

CUYAHOGA FALLS, OH, Sept. 3, 2018 — More than 220 years ago, George Washington warned his country about the dangers of political faction. In his Farewell Address, Washington cautioned against the “baneful effects” of factions, calling them “A fire not to be quenched.” He wrote. “It demands a uniform vigilance to prevent its bursting into a flame, lest, instead of warming, it should consume.”

As we pause today in gratitude to our nation’s workers for their hard work and ingenuity, it’s apparent to many that partisan factions have in fact consumed every aspect of daily life. Sports? Check. Media and entertainment? Check. Religion? Check. Family relations? Check. Government and law enforcement? Sadly, check.

Journalism? Huge checkmark goes here too. While a few media outlets still strive for balance and objectivity, the vast majority are now easily classified as “left” or “right” in how they report and in the narratives they employ. Here is a chart which Sharyl Attkisson https://sharylattkisson.com/, long-time CBS News investigative reporter who’s now on Sinclair Broadcasting with a Sunday news analysis show named “Full Measure” has developed. 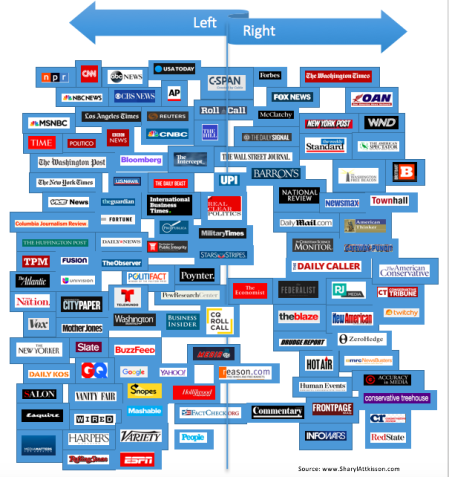 Suggestion: Refer to this chart whenever you are reading or following stories about government and politics. It will enable you to better evaluate the source and detect possible bias.

Thwarting the peaceful transition of power

What differentiates the U.S. from other nations? One shining aspect of our democracy is the peaceful transition of power from one duly- elected candidate to another, from one political party to another. As Nicandro Iannacci of the National Constitution Center recalls the words from Ronald Reagan about this in his first inaugural address:  “… few of us stop to think how unique we really are. In the eyes of many in the world, this every 4-year ceremony we accept as normal is nothing less than a miracle.”

Now, enter Donald Trump’s and Russia “collusion” into this equation. The question of what Trump did with respect to Russia in the 2016 election received an amazing high level of media coverage in January 2017 in the weeks prior to and just after Trump’s inauguration. In hindsight, stories about possible Trump-Russia collusion had a sense of apophenia in their approach.  Apophenia is a tendency to see patterns or shapes in random situations. Many in our divided public couldn’t accept the fact that Trump had won the electoral vote, and there must be some unique or unparalleled reason for it.

Ready-made to explain why, almost on cue, came charges of Russian tampering with the 2016 Presidential elections and possible Trump collusion with Vladimir Putin. It “fit” almost perfectly, since all it would have taken is a shift of about 50,000 or so votes in a handful of states to change the electoral vote outcome.

Within his first 120 days of being in office, Trump fired FBI Director James Comey and then found himself subject of a Special Prosecutor’s investigation headed up by a former FBI director, Comey’s predecessor, Robert Mueller. Mueller’s mandate: To investigate Russian interference in the elections, and to look for any connections between those and the Trump campaign. Conspiracy would be a more precise term than collusion for what Mueller is seeking, by the way.

Trump and his supporters quickly reacted with cries of “witch hunt” and pointed out the double standard of the FBI’s investigative process. Tens of millions of dollars were donated to the Clinton Foundation from numerous international sources, including Russians. Hillary Clinton and her team were recklessly disobeying laws and protocols with securing their own e-mail communication, and the FBI looked the other way.

Almost lost in this titanic tug-of-war is this: For the first time in our democracy, one partisan side refused to go along with the peaceful transition of power. In 1960 Republican Richard Nixon could have litigated questionable vote tallies in Illinois and elsewhere, but chose to place country over politics. In 2000, Democratic candidate Al Gore could have continued to battle Florida, but put aside further fighting for the good of the country.

The opposite took place in 2016-2017. First there was a concerted effort to persuade Electoral College electors to not cast their votes for Trump. Next, rather than accept a Trump presidency, we saw boycotts of the inauguration, witnessed counter demonstrations, and heard calls of “Impeach 45” from Democratic Congressmen, all in January 2017. These same partisans saw the slightest shred of Russian involvement in the 2016 elections (unconnected to Trump) as a pattern of conspiracy – apophenia.

This non acceptance of an election’s outcome has but one parallel in nearly 230 years of our nation choosing its President under our Constitution. That was in 1860-61, when South Carolina and six other states seceded from the Union in response to Abraham Lincoln’s election. Next there came the Civil War.

It is with this perspective need to enter a brief look at both Christopher Steele and his Steele dossier, and top FBI officials Peter Strozk and Lisa Page.

Steele is a former British spy (MI6) with numerous contacts to top Russian intelligence agents, including current FSB and SVR (Russian federal security and spy) members. He was in essence “double dipping” in 2016, being paid by both the FBI and Fusion GPS, an opposition research firm which (for this project) had as its client the Democratic National Committee.

Steele produced a dossier, or a collection of documents about Trump and the2016 election, which alleged (among many other things) conspiracy between members of Donald Trump’s election team and Russian agents. Rather than repeating all these allegations, look at the dossier (largely un-redacted) which the media outlet BuzzFeed published last year. A link to it is below. Judge for yourself.

As a stand-alone, Steele’s dossier seems to contain damning information against Donald Trump and its campaign. But it’s just a small part of a much bigger picture. While Steele was composing and sharing his dossier with the FBI, high-level Bureau members Peter Strozk and Lisa Page were focused on exonerating Hillary Clinton of any wrongdoing and ensuring that Clinton would end up winning the November presidential election. This is according to a Washington Post story which examined thousands of text messages which the two (who were having an affair) exchanged. Strozk interviewed Hillary Clinton as part of the e-mail investigation, examined Russian involvement in the election and – until removed – was on Special Prosecutor William Mueller’s team as well.

Strzok: “I want to believe the path you threw out for consideration in Andy’s (Deputy FBI Director Andrew McCabe) office — that there’s no way he (Trump) gets elected — but I’m afraid we can’t take that risk. It’s like an insurance policy in the unlikely event you die before you’re 40.”

Later, after Trump’s election but before the inauguration, Steele leaked portions of his dossier to media members. Later still came Mueller and the Special Prosecutor. Here’s another text message:

May 18, 2017, shortly after the appointment of special counsel Robert S. Mueller III

Strzok: “For me, and this case, I personally have a sense of unfinished business. I unleashed it with [the Clinton investigation]. Now I need to fix it and finish it.”

If one looks at the actions which Strozk, Steele, Bruce Ohr, and others in the FBI took, it is strikingly reminiscent of a DISINFORMATION campaign.

Not misinformation. We know that many are making efforts to misinform us. But as authors Ion Pacepa (a defector from Romania) and Professor Ron Rychlak explain in their book “Disinformation,” a disinformation campaign takes a kernel of truth, wraps a false narrative around that kernel, and then widely disseminates that narrative to deliberately discredit someone or something.

If we “connect the dots” as to what transpired within the FBI from June 2016 to May 2017, what we see is a high-level effort to draw attention away from Clinton and to discredit Trump, so much so as to make it  severely difficult or impossible for the latter to govern.

That is a horrible assessment of where our FBI was sitting only a short time ago. This is light years removed from the peaceful transition of power prescribed in Article I, Section 4 and Article II, Section 1 of our Constitution. It’s more reminiscent of “Seven Days in May” instead.

I predicted in this blog that Donald Trump would win the Republican nomination for President.  Here is a link to that posting:

Friends questioned my sanity then. They don’t now, because some of them also understand how the public has an almost toxic reaction to the media. According to Pew Research, trust in the media hit an all-time low in 2017-18. Only 21 percent of the public has a lot of trust in national news organizations. Twenty-nine (29) percent have little or no trust in them.

What’s worse – younger adults pay no attention to the news. Research indicates a large percentage of those under 25 pay attention only to whatever stories pop up on their “most popular” feed from the social media services they most frequently use. Many are reading or watching no news at all.

What’s probably worst of all is that few executives in the free press, either on the editorial or the publishing/advertising side, seem to fully comprehend the long-term detrimental effects of a knock-down, drag-out war between the Fourth Estate and the current occupant of the Oval Office. There will be no winners if this continues, and the biggest loser is our democracy.

Larry Nassar might still be abusing gymnasts today if it wasn’t for the outstanding investigative reporting of Marisa Kwiatowski, Mark Alesia and Tim Evans  of the Indianapolis Star.  This trio of reporters poured through thousands of pages of court records and interviewed dozens of Dr. Nassar’s victims. Finally they found one person — Rachael Denhollander  — willing to go “on the record” and be publicly quoted for the story.

After that, the floodgates to the ultimate disinfectant, the sunshine of truth, poured out. Nassar will now spend the rest of his life in prison for his crimes. A link to the New York Times story about this trio of reporter’s work is below.

There are tens of thousands of horrible criminals and wrong-doers in our nation and beyond. There are crimes to be uncovered, corruption that needs to be rooted out, and victims whose stories need to be told.

That’s why journalism matters, perhaps more than ever, in an age where we receive only snippets of stories from cell phone feeds and make snap judgements on meaning.

To read the Steel dossier: