A few things I learned this summer

It was a different world when I attended and then graduated from the Cleveland Schools in the ‘60s and ‘70s. The new school year ALWAYS began on the Wednesday after Labor Day, and ended sometime in the second week in June. I was in kindergarten when America’s newest hero was named John Glenn, and none of us back then knew about Mary Jackson, Katherine Johnson, Dorothy Vaughan, or the other “Hidden Figure” mathematical geniuses who helped make our manned spaceflights possible.

One assignment on that first day back in school was inevitable: In some way, shape, or form, my classmates and I would have to write about or talk about something learned over the summer. (Oxford comma purists have taken note by now.) So with a nod and accolade of thanks to Rita Doherty at James Ford Rhodes High and some of my other teachers, here’s my submission for the 2017 version of the assignment.

What is causing “Fake News” is worse than we realize. Having worked for a while in Washington DC, and as a lifelong observer of how the media covers our leaders, I’ve never witnessed an internecine struggle that is even close to what has been happening between President Trump and much of the news media. When I bought and read former CBS News reporter Sharyl Attkisson’s most recent book, The Smear: How Shady Political Operatives and Fake News Control What You See, What You Think, and How You Vote, what’s happening came into a clearer, more tragic focus. If you are at all concerned about what is transpiring between the news media and the current occupant of 1600 Pennsylvania Avenue, read the book.

Fake News was the subject of the keynote address at the Association of Educators in Journalism and Mass Communication (AEJMC) conference last month. It’s also the subject of the Poynter Institute Ethics Workshop at Kent State University on September 21 (see link below). An August encounter with Dr. Jeffrey Gottfried, a Senior Researcher at Pew, at the AEJMC Conference confirmed some of my worst suspicions about the negative effects of the President vs. news media struggle. Americans’ attitude about the role of the news media is more divided, among party lines, than ever in modern times. There is a 42 percent difference between Republicans and Democrats in answering a question about the media’s watchdog role. Look at graph, and at the link below for more details: 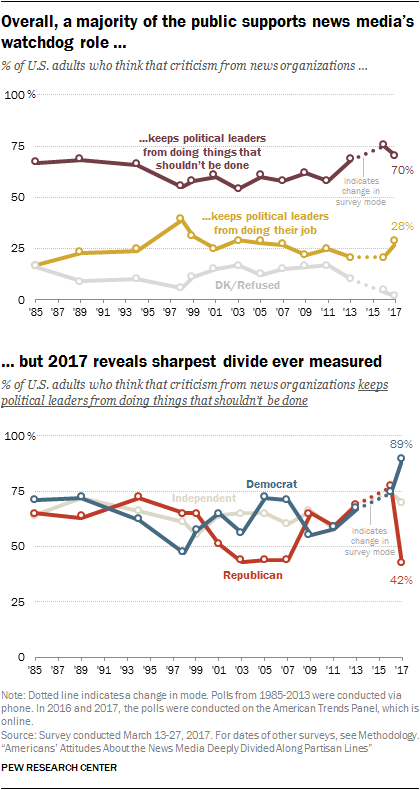 This important matter led me to develop a “fake news” module which I share with my students. Below is a link to the Power Point presentation, where I identify four types of fake news and give some “be on guards” against it.

Before I leave the subject, let me add a brief personal observation. They won’t admit it, but news directors and editors – and their bosses – have been experiencing a phenomenon I’ll describe as “coverage remorse.” At times in the 2015-2016 presidential election campaign, major media outlets devoted more time and attention to Donald Trump than all other candidates COMBINED. Rightly or not, they imagine themselves somehow “responsible” for President Trump’s election. So, just like an umpire who makes a bad call one way and then does a “make good” for the other side in an athletic contest, some media outlets feel an obligation to cover Trump more critically as president than they covered Trump the candidate. Rather than elaborating on this, I’m simply going to refer you back to the blog I wrote on Labor Day 2015, when I predicted Trump would win the Republican nomination for President. Here’s that link:
https://jkerezy.wordpress.com/2015/09/02/media-memo/

MOVING ON … Revere Schools’ academics are outstanding, and there is no upper limit on how terrific the students there who choose to engage in speech and debate can become. Revere ended up sending three students to compete in the June 2017 National Speech and Debate Association national championships in Alabama. One, (now) 10th grader Claire Jimerson, qualified and competed in Congressional Debate. Two others, (now) 9th grader Sophie Brandewie and 8th grader Drake Du, competed in middle school Public Forum debate. Claire was the No. 1 ranked debater coming out of her Congress chamber in preliminaries, making her the first Revere competitor in 20+ years to advance at Nationals. One day later, Sophie and Drake advanced to elimination rounds in Public Forum debate. They won their first two debate rounds (one in a unanimous decision), before losing a 2-1 decision in National Quarterfinals. They were debating together for the first time in their lives, and they finished 7th in the U.S.

The average age of these three students – 14. They were all first-year competitors. Claire was opposing students with two, three, even four years of experience. Sophie and Drake opposed debaters who had two or three years of prior middle school competition. Yes, Revere’s students were that outstanding in their Nationals competition. 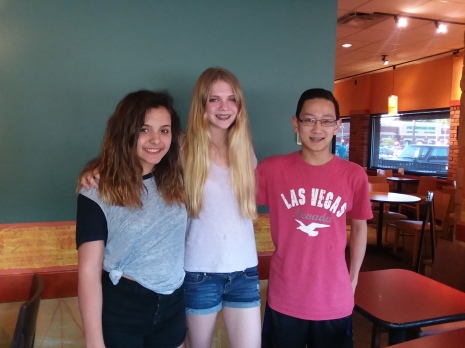 I can’t say enough about the great support and encouragement Revere Schools gives to these students, to my college student helpers, to our Revere Speech and Debate Boosters organization, and to me. From the School Board, Superintendent Matt Montgomery, Principal Phil King, the faculty, and (now) middle school Principal Bill Conley, everyone at Revere gets behind our Talking Minutemen heart and soul. Our junior and senior competitors (and we now have nearly 20 of them) are also eager to lead and to share what they’ve learned with younger competitors. It’s a harbinger of even better things to come for about 90 students at the high school and middle school who are telling me they are competing in speech and debate this year. HW +  P + R = Victory. Here’s what I mean:  https://talkingminutemen.wordpress.com/2017/09/04/hw-p-r-victory/

FINALLY …. I am blessed beyond measure. My life is far from perfect, there are plenty of messes. But I thoroughly enjoy teaching at Cuyahoga Community College, and cherish the opportunity to make an impact in the lives of young adults there. I was elected to serve on the National Association of Wabash Men board, and I love the chance to help my alma mater, Wabash College, in this capacity. One of my classes this fall is planning be embedded with refugees from a the ministry Building Hope in the City, and then writing stories about the refugees and the program helping their transition from horrors abroad to a life and new home in Cleveland. I continue to be blessed by a wonderful wife Kathy, a great son Tyler and a loving family, and by being in a community of believers in Christ at Cuyahoga Valley Church.

I’m in my ‘60s – the final quarter of my time on earth. Daily I’m reminded of words which the Apostle Paul wrote to a church in Philippi about 2,000 years ago “…forgetting what lies behind and reaching forward to what lies ahead. I press on toward the goal for the prize of the upward call for God in Christ Jesus.”

I press on, as long as I can to do as much good as I can, and to be as helpful as I can for others.

Thanks for reading this blog, which (no trumpets) I have been writing now for 10 years.

This entry was posted on Friday, September 8th, 2017 at 10:55 am and is filed under Uncategorized. You can follow any responses to this entry through the RSS 2.0 feed. You can leave a response, or trackback from your own site.

2 Responses to A few things I learned this summer