Recently I had an opportunity to visit Birmingham, and spent some time seeing where some of the most important battles of the Civil Rights era took place. Dr. Martin Luther King wrote his famous “Letters from a Birmingham Jail” that April, challenging white ministers in the city to support equal rights for African Americans. Later that spring, Commissioner of Public Safety “Bull” Connor resorted to using high-pressure water cannon and police dogs to disperse protesters, and even used the same tactics on more than a thousand teens and children. 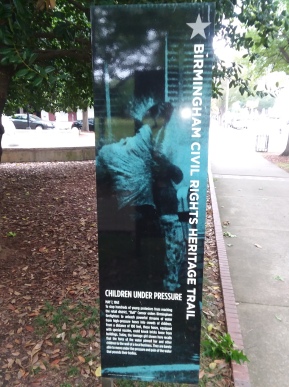 Dr. King and other leaders staged sit-ins at segregated lunch counters. Some were arrested for arranging marches to register to vote. They held protest marches and faced unimaginable violence. Four teen girls died when racists planted and detonated a bomb at Sixteenth Street Baptist Church that September, less than three weeks after Dr. King delivered his “I Have A Dream” speech in Washington.

It was also fascinating to learn a bit about the African-American press of that era. The Birmingham Record didn’t assail the city government and public safety for its overtly racist policies at first. African-American papers in other cities were far more critical in their coverage than the hometown paper. Why? Long-time paper editor Emory Jackson had reservations initially about Dr. Martin Luther King Jr’s choice of Birmingham as a ‘target city’ to fight racial inequality.

But other African American newspapers DID report extensively, mainly those in the North, about the violence. Their editors, reporters, and publishers were geographically shielded from the Ku Klux Klan, the bombings, the arrests, and other overt vestiges of racism. The national media reported extensively on the violence as well. Jackson and the Birmingham Record joined in later as well. There were no African American police officers in Birmingham in 1963, despite the fact that blacks comprised 40 percent of the city’s population.

Jackson put an editorial on the front page of the Birmingham Daily Record after the Sixteenth Street Baptist Church Bombing. “They were victims of cruel madness, the vile bigotry and the deadly hate of unknown persons,” he wrote. He urged people to “pour into the churches on Sunday, stream to the voter registration offices, make their dollars talk freedom, and build up a better leadership.”

There is a powerful lesson there, one which time and distance should never diminish. A free press is essential to accurate reporting, and fair and accurate reporting is more necessary than ever in democratic nations. Governments (be they Democrat or Republican) will lie, withhold information, and try to slant a story in their favor. The Birmingham News, the “white owned” daily newspaper, actually praised the tactics of Connor and the police in 1963.

That’s probably another important difference between 54 years ago and today. The “mainstream” media is much more attuned to injustice and wrong-doing. One of the reasons why the national coverage of Ferguson was so extensive a few years ago is the strong sense in the journalism community that justice in the United States is STILL not equal, 50-plus years after passage of the Civil Rights Act.

Dr. King: We’ve made a lot of progress since your “I Have a Dream” speech in August 1963. But there’s still a long way to go until all God’s children are truly “free at last.”

“How has journalism become so messed up?”

Hundreds have asked me that question in the past few years. The explanation is complicated, because journalism now has so many players involved to a much greater extent than ever before. By “players” I’m referring to a lengthy list: PACs and Super PACs; “non profits” that are exerting huge influence on media coverage through spending millions of dollars; corporations, who use their power to sway both the media and government to get their way with regulations and laws; public relations agencies with greater reach than ever before; lawyers; think-tank organizations that wield substantial power in the Beltway encompassing Washington; savvy social media organizations that create “grassroots” support of or opposition against candidates and/or causes; and political operatives far more concerned about “their side” wining than that truth; and – let’s admit it – smear merchants, operating and interacting with friends in the media for decades now, whose professional goal has become to demonize and destroy the personal lives of anyone (journalists, private citizens, candidates) who oppose their client’s agenda.

Sharyl Attkisson has done our democracy a tremendous service with her latest work, titled “The Smear: How Shady Political Operatives and Fake New CONTROL What You See, What You Think, and How You Vote.” If you want to understand journalism today, it’s a must-read book. But be warned – this isn’t a “take it to the beach” page-turner. Your blood pressure is bound to go up as you walk through Attkisson’s chapters, regardless of your political affiliation.

I’m not through reading the entire book yet, but after about 100 pages I can unhesitatingly recommend it to anyone who has wondered what’s happened to the practice of professional journalism in the last quarter century. Attkisson, who was with CBS News for about 20 years, provides an authoritative explanation, and she also has the benefit of “insider” knowledge of the gatekeeper and editorial decision-making processes.

Here’s a quote from Attkisson’s introduction:

“We in the news media have allowed ourselves to become co-opted by political, corporate, and other special interests. We permit them to dictate this story du jour. We let them dominate the opinions we consult and quote….We’ve become a willing receptacle for, and distributor of, daily political propaganda. And because we invite both sides to feed us, we call it fair. In many ways, some media outlets have become little more than thinly veiled political operations.” (Page 5)

Attkisson doesn’t pull punches. She writes the way she reported when with CBS, fearlessly. You won’t feel good about what you discover, but at least you’ll get a better sense of how we arrived at where we are in 2017.

Mangun, Kimberly, “Emory O Jackson, the Birmingham World, and the fight for civil rights in Alabama”