Setting the agenda, framing the message

As soon as Republican Presidential nominee Mitt Romney announced his choice for Vice President, Cong. Paul Ryan, the Democratic National Committee changed its main web page. If one clicks on www.democrats.org, you would see a box of a grim-faced Ryan next to the words, in reverse type, “He could be a heartbeat away from the Presidency.” Beneath the box are the words “Get the Facts on Paul Ryan” and response boxes seeking your email and zip code, above the words, “Tell Me More.”

Minutes later, prominent, media-savvy Democrats all were talking, Tweeting, Facebooking and propagating five main “negative facts” about Cong. Ryan all over the U.S. Here in Ohio, long-time politician and Democratic State Representative Robert Hagan was part of the “Pile on Ryan” chorus.  Like Ryan, Hagan is of Irish descent.  He’s also Catholic. But neither commonality deterred him from following word-for-word the Democratic “attack on Ryan from the get-go” strategy. His very first Facebook post on Ryan, sharing a graphic from the Obama “Truth Team” Facebook page, began with these words: “Who could vote for something so radical?” 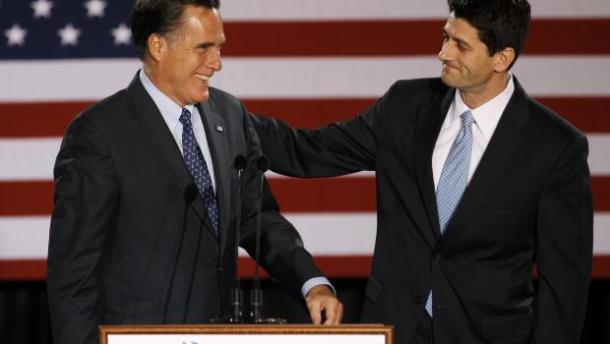 Over on the other side, at www.gop.com, just the opposite was happening. “Meet America’s Comeback Team,” screamed a headline next to the picture of Romney with Ryan.  The web site pitched contributions to the Republican National Committee, and also sought out opinions about the Republican Party platform.

Andrea Mitchell of NBC News, reporting at the site of the Vice Presidential nominee announcement in Virginia, criticized it on the air, saying, “This is Not A Pick For Suburban Moms, Not A Pick For Women.”  Syndicated columnist and Fox News commentator Charles Krauthammer reacted in just the opposite manner. Interviewed live on Fox News just before the announcement, he said, “I think they are vastly underestimating Ryan and also vastly underestimating…Ryan has that Reagan-like quality.”

Republicans and Democrats, and their media allies, were all engaging in what’s know in mass communication studies as ts the agenda-setting effect. Something that’s been studied for nearly 50 years, agenda-setting is the result of the decision-making process in newsrooms all over the country. News director and editors make decisions about devoting time and space to competing newsworthy stories.

Two assumptions behind research on agenda-setting are:  The media do not reflect reality — instead, they filter and shape it; and media concentration on a few issues and subjects leads the public to perceive those issues as more important than others.  In 1963, Bernard Cohen, writing in his book The Press and Foreign Policy, said, “The press may not be successful much of the time telling the people what to think, but it is stunningly successful in telling its readers what to think about.”

What makes 2012 such a fascinating election year is that due to the meteoric rise of internet news and social media, combined with the continuing decline of readers and viewers in virtually all of the mainstream media, there will be countless research studies done to measure whether agenda-setting is less prevalent and less powerful than in past presidential elections.  One example: CNN now has fewer views than it has in 1991. Will influence wane as readers and viewers diminish?  We will see.

Framing – President and allies are hard at it.

Virtually every “Fact Checker” organization in the U.S. has lambasted the Priorities USA Super PAC attack ad that falsely links Mitt Romney to a woman who died of cancer. The woman’s husband had worked for a Bain Capital company, but she received health insurance from her own employer and hadn’t sought insurance coverage through her spouse.  She was also diagnosed several years AFTER Romney had already left Bain.  Those two facts were ignored, of coruse, in the attack ad.

President Obama’s re-election campaign and his allies are busily engaging themselves in a mass communication strategy known as framing, the general way the media treats a news topic. It’s pretty straight forward: if the media focuses on a negative ad, even a false one, that’s less time and attention that the media will devote to another topic – such as unemployment, the national debt, the budget deficit, health care mandates now taking effect, etc.

Nationally and locally, media consultants are decrying this ad and the practice of negative ads in general. Mary Anne Sharkey, former director of The Plain Dealer’s editorial pages and now a principle with Sharkey and Dirck consulting, posted a quote from a media interview on her Facebook page that reads, “I opined that they have lost all credibility and effectiveness with absurd, beyond the pale attacks.”

The real tragedy is that when campaigns engage in framing maneuvers of this nature, they deprive the voters of an opportunity to learn more facts about the candidates and their stand on the issues. There is a terrific opportunity for the MSM – mainstream media – to prove its worth in our society by providing in-depth coverage on genuine issues in the 2012 Presidential campaign.  There are huge differences between the two main candidates on many different issues. Yet here in Ohio, perhaps the No. 1 battleground state in the 2012 election, more than 80 percent of all of the television ads we’re seeing are of the negative, attack-the-other-candidate variety. Let’s hope directors, editors, and reporters in newsrooms in Ohio and across the country get past the negativism and do interpretative reporting that explains in detail what a Romney presidency or second Obama administration would mean to the average Jane and Joe in America.

The media truly needs to rise to this challenge, because Americans’ hope for the future is at its lowest point ever.  According to this week’s Rasmussen Poll, only 14 percent of Americans think today’s children will be better off than their parents. That survey alone should give plenty of opportunities for the mainstream media to write compelling stories, simply by seeking the answer to WHY Americans believe we’re heading downhill.

Kudos once more to the student journalists at my college! In late June the team did a superb job of covering President Obama when he spoke at Cuyahoga Community College.  Stay ready – if the Presidential election comes down to Ohio, there’s little doubt that the major candidates will be back in Cleveland, and you’ll have more opportunities to gain valuable reportorial experience.  To see how well these students did last month, click:
http://www.cccvoice.com/tag/cleveland-ohio-presidential-president-visit-barack-obama-tri-c-cuyahoga-community-college-tickets-sold-out-alternate-location-to-watch-auditorium-no-tickets-needed/

For the past three days I’ve been privileged to attend the Association for Education in Journalism and Mass Communication (AEJMC) Conference in Chicago.  I belong to AEJMC and its Community College section, called CCJA.  Our section also collaborated with our friends in the Small Program Interest Group (SPIG) and Critical Cultural Studies (CCSJA) to present some terrific panels and workshops at the Conference in Chicago.  CCJA, under the leadership of Mount San Antonio Professor Toni Albertson, has revamped its web page and is firmly into 2012 with frequent Twitter feeds and updates.  Check them out here:  http://ccjaonline.com/

OTHER SOURCES FOR THIS BLOG

This entry was posted on Saturday, August 11th, 2012 at 9:20 pm and is filed under Uncategorized. You can follow any responses to this entry through the RSS 2.0 feed. You can leave a response, or trackback from your own site.